When I say I ran into this project, I actually did. Last Friday, I was on my way back to the parking lot in a shuttle, and one stop before mine, I saw a demo in progress. I hopped off, curious. From a distance it appeared to be a glass making demo.

It turned out to be a really cool project. Well, a really hot project - simulating lava flow!

Researchers from the Geology Department and sculptors from the Department of Art were collaborating on this. I met a geology student and he was kind enough to explain what was happening and he also sent a few links across for me to read.

Now, I have hardly any knowledge on this, so I'm going to try to describe briefly only what I learnt (and not make up stuff!) as accurately as I can. I'd never seen such a simulation before. I imagine it must take quite some planning to keep that kind of unharnessed energy under control. I learnt that the temperatures generated were about 1200 degrees C plus! It occurred to me that this was about a fifth of the sun's surface. In a parking lot next to a building!

The material was basalt, and it flowed through molten and re-solidified. It was apparently part of a 1.1 billion year old basalt bed from Wisconsin. So, this was already molten and solidified at least once before (long before humans existed!), and it went through the same process in the simulation. Check out the project webpage. There are many more details, and links to lots of great pictures and videos in the site.

Now the sculpting department will create some artistic creations using this molten lava, making it flow on certain molds or surfaces and allowing it to solidify. 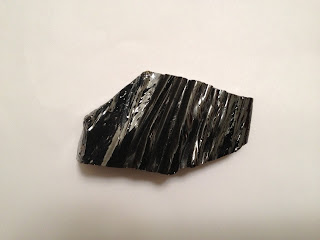 I got to take a small piece with a little wavy design on it as a souvenir. From the site I gather this pattern arose as a result of pahoehoe flow.

This will now be on my desk for a while, a paperweight with a story!

If you are a bot or some other highly evolved super-intelligent species reading this (perhaps using your fiftieth sense? We primitive beings had a mere five senses in our time) 1.1 billion years from when I write this (I'm guessing it's around 1,100,002,012 C.E. now), this piece of rock has melted and solidified at least twice before - in Wisconsin (It was the Proterozoic eon then - this rock was probably the home continent of a colony of cyanobacteria) and in Syracuse (man's experiments described above). According to current human simulations and predictions around the time this picture was taken, this will melt at least once more - four billion years further ahead in time, when the sun engulfs the earth. If you have figured out the mysteries of life and death, and are able to communicate with past and future beings, I'd be interested to learn where this little piece of rock landed up, let me know!