It is perhaps not wrong to say that human beings are on top of the evolutionary system, at least for now - that is, if the metric to measure it is the potential to control our environment; our brain has led us to be so. That said, clearly there have been many species which have hung around longer than we have, and can continue to live on even after our species is gone.

Consider for a moment, the shortcomings we have as a species:

1. Power: Nowhere close to the best there is: There are plenty of species which have far more powerful limbs or body structures - elephants can carry a few tonnes of weight; lions, tigers, bears have extremely powerful paws, etc.

2. Speed: Again, not even close to the best. Our legs are not designed to be so. An interesting article examines this in more detail and concludes that an ostrich's leg is perhaps the best for bipedal organisms like us. And, of course, cheetahs are known to be the fastest at about 120 kmph. The current fastest human, Usain Bolt, has a top speed of 44.7 kmph. The same article says that even a common domestic cat can reach about 48 kmph.

3. Respiratory System: I learned from many websites that fish have perhaps the most efficient respiratory systems. The reason is that oxygen concentration is so much lower in water that such efficiency is needed for survival. On top of that, there are many amphibians having systems capable of surviving on land and water. Humans do not have such high efficiency. And since we are not amphibious, efficiency is zero in water. In spite of all our efforts, we are only able to go a few feet underwater for very little time with heavy equipment, as I learnt from scuba diving - for multiple reasons: limited air supply in cylinders, increasing pressure at depths, hazardous nitrogen absorption rates, etc.

4. Eyes: The Mantis Shrimp is said to have the best - according to this article, they can see polarized light, have advanced depth perception, and is equivalent to having "10,000 telescopes"

5. Bite strength: An article in National Geographic credits saltwater crocodiles as having the most powerful bites at about 3700 psi, whereas us humans have a measly 150-200 psi. Many other creatures such as poisonous snakes and frogs have extremely potent venom even if their bite strength may not be much.

And many other such examples of very ordinary features. In any case, the point is that we have probably no distinguishing features that are the best among other animals, or even close to the best. Other animal species have outclassed us in all respects.

All except one, that is - the human brain obviously. About 900-1400 cc of brilliance! In this sense, we are perhaps light-years ahead of other species...at least, for today. This is in spite of being one of the most early "intelligent" brains. Also, that we use just 10% of our brains is supposedly a myth. Our species' survival arguably is only because of our brain. Not just survival, but our "superiority" as well. The quotes is because our superiority is pretty clear, biologically speaking...but fairly questionable, practically speaking, when we look at the plethora of examples of human stupidity :)

Let's take a step back, and consider our species with no intelligence (again, biologically please - I can foresee lots of cracks about why this is so hard to imagine :)). Perhaps, we would never have survived even for a little bit, a few seconds on the evolutionary timescale, we would perhaps have made a nice snack for a few carnivores, and that would have been that - we would likely not have been fit enough to survive, à la Darwin. Or maybe, we would not have even formed in the first place!

So, in summary, that's where we are on the evolutionary scale - very weak and inefficient body systems, but a primitive brain that is so advanced that we not only are able to survive, but are a superior species.

(1) all our bodily features are inefficient (except perhaps opposable thumbs),
(2) we are using our brain close to capacity, and
(3) it is purely our brain that has taken us to where we are,

...then my vision for the future of human evolution is as shown in the figure below. 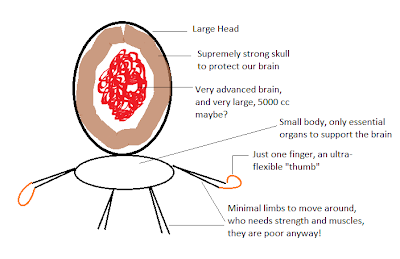 (I'm obviously not much of an artist, but this is just to illustrate the concept :))

Anyway, that was my lazy Sunday evening wondering what the future holds for us humans (provided, of course, that our species does not self-destruct). If you are an advanced "human" (that had the homo sapiens as your predecessors) reading this, please communicate with me by time travelling back to me using your extraordinary brain, and let me know how this prediction worked out.